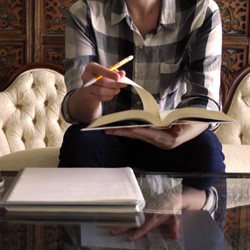 YA recommendations with lists, pictures, and frequent parentheticals. 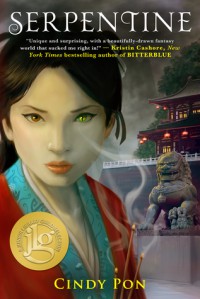 I've been in a state of anticipatory fidgets since I heard about Serpentine several months ago.  Cindy Pon's previous books didn't impress me, but Serpentine promised four of my favorite things:

Fidgets were obviously called for.

Unfortunately, the novel wasn't as well executed as I'd hoped—I'd give it about two stars for style and several aggravating bits—but I'll be honest: those four wonderful things were wonderful, and worth at least four stars on their own. Averaging that out to three stars seems fair.

But I'm obsessed with mythical snake-ish figures of all types; I probably would've docked half a star if Skybright had turned out to be yet another wolf- or feline-shifter. I'm definitely biased, and Serpentine played right into those biases.

I think this is the first time I've felt so much affection (and so little annoyance) for a book that ultimately disappointed me. Weird.

A lush portrayal of life in the ancient Kingdom of Xia and inspired by the rich history of Chinese mythology, this sweeping fantasy tells the coming of age of a girl who worries about the startling changes in her body. Sixteen-year-old Skybright, a companion and handmaid to the youngest daughter of a wealthy family, experiences a growing otherness so troubling, she will risk everything to conceal her dark secret from everyone, including the boy she's falling in love with.

The relationship between Skybright and her mistress/best friend Zhen Ni is complicated: they were raised together, and Skybright is bound to Zhen Ni for life (unless Zhen Ni inexplicably decides to free her of her lowly handmaid status). Skybright's secure in the knowledge that even when Zhen Ni marries, she'll still hold that Best Friend slot in Zhen Ni's heart because a husband is just some dude your parents decide you'll marry.

But Skybright wasn't counting on Zhen Ni falling in love with a girl. When family guest Lan arrives (with her pretty face and marvelous laugh), Skybright realizes that maybe Zhen Ni can have a companion who's both best friend and lover. The result: Skybright feels totally betrayed.

Skybright's doing some betraying of her own, keeping her newfound serpent-shifting abilities secret from Zhen Ni.

What follows are delicious friendship complications, with all three girls struggling within their complex and seemingly doomed relationships: Even greater: it's Skybright's friendship with Zhen Ni that pushes a lot of the plot forward, not Skybright's romance with boy-who-lives-in-the-nearby-monastery-but-isn't-actually-a-monk Kai Sen. In this way the story's reminiscent of Sanctum; but unlike Sanctum, we can relish in the friendship because the girls spend much of the book together.

So I kind of lied: romance pushes the plot forward as much as friendship does—but it's the secondary characters' lesbian romance that does the pushing, and only because it affects Zhen Ni and Skybright's friendship. This would've been a very different book if it had been missing either the friendship element or the lesbian-secondary-romance element.

Because it's a secondary romance, it's not portrayed in detail. We watch it develop through Skybright's (jealous, confused, betrayed) viewpoint, and she doesn't exactly idle her time away taking notes on lesbian courtship rituals. She has other problems to deal with. Demon problems. (Demon problems that aren't referenced in the book's synopsis, for some reason.)

The book struck a pretty good balance between friendship/lesbian-romance problems and demon problems. Two thumbs up.

I'm kind of in love with how flawed by Skybright and Zhen Ni are. Zhen Ni loves deeply, but she's also a selfish brat: Skybright has good intentions, but also shows cowardice and jealousy:

They both make dumb decisions over the course of the story, but their decisions are the natural and understandable products of their character flaws.

It is so damn refreshing not to complain about characters doing uncharacteristically dumb things for the sake of plot.

Guys, It Has a Theme

There's a fantastic theme that's reflected in multiple characters throughout the book, and that theme is responsibility. More specifically, that undesirable responsibility you'd do anything to avoid, but can't; you have to accept it for the greater good of the people around you. Or, as Zhen Ni's mother so eloquently puts it (after whipping Skybright and Zhen Ni):

We see several characters struggle beneath the weight of responsibilities that require them to act against their own desires. Seeing a theme at work in multiple characters like this makes for pretty satisfying reading. (Hey, authors. Do this more often.)

That said, Skybright herself doesn't reflect this theme very well; the sacrifices she makes aren't out of responsibility to the greater good. Mark this down as something that should be in my list of disappointments. Can't win them all, I guess.

Serpentine generally tries to craft a vivid scene for the reader, providing details of architecture, clothing, plants, and food: But the writing style is very simple, relying on regular ol' standard phrases to describe things. The day was hot, the fish darted, the wooden railing was carved. This made the descriptions more bland than evocative.

Interesting descriptions use the element of surprise and newness, presenting the reader with a word or phrase that they've never seen in connection to the thing being described. (For example: I was delighted to read the noise of a turning toilet paper roll described as "its staccato" in Lolita. That was such a perfect, unexpected description.)

Scars that resemble an animal's stripes are neat, but that neat image is preceded by a slew of dull ones: a growling stomach, ginger steps, opening a window, time described as a few hours past dawn instead of whatever she sees out the window, slowly dressing, brushing her hair, winding her hair into braids, scabs that reveal (pale) new skin.

The writing style also relies heavily on telling instead of showing the reader what's going on inside Skybright's head. Here's an example from very early on, when Skybright's about to have her fortune read by a Madame Lo: I like "the damp of her palms," but the rest of that paragraph is kind of a slog. Just so much explanation. The result is a flat, blah writing style that was difficult to get into.

It also prevented me from bonding with the characters. Yeah, I liked Skybright and Zhen Ni's personal flaws, but they were ultimately pretty bland. A more vivid or interesting writing style (along with more character development) could've perked them right up.

Weirdly, the writing style took an abrupt downward turn as the antagonist appears in the climax. I won't describe the scene for you because spoilers, but let's just say that I read the page three times and still don't have a good mental image of what happened. Also, the antagonist arrived with the dumbest Villainous Monologue two-liner ever. It is so bad.

Kai Sen is Skybright's love interest, and she first lays eyes on him when peeking over the monastery's high walls to see what monks do all day:

She later learns he was raised by the monastery's abbot after his parents abandoned him:

Kai Sen's your standard romance guy, with a good laugh and a nice body and not much personality. I shouldn't have been surprised when they wound up falling in love after spending a grand total of, oh, maybe five hours in each other's company.

I could buy them experiencing physical attraction, giddy fantasies of what their relationship could become, and the first eager steps toward love—but not True Love itself.

For a book that otherwise took such a pragmatic and honest approach to love as experienced in its fictional society (you don't marry for love; affection might develop after a decade or so with your spouse, if you're fortunate), Skybright and Kai Sen's romance felt fake and melodramatic.

Kai Sen as the Abbot's Heir

I'm assuming the author chose not to make Kai Sen a monk so he and Skybright can (a) have sex, and (b) enjoy the glimmering potential of a committed relationship down the road. As a monk, Kai Sen would've been bound to his monastery and vow of celibacy.

That's fine, except we later learn that the abbot intended Kai Sen to become his heir. Heir to the monastery. As in, the next abbot.

To remind you: the abbot explicitly refused to raise Kai Sen to be a monk. The monks Kai Sen grew up with know he's incapable of becoming one of them because the abbot won't accept him as one.

So how on earth could not-a-monk Kai Sen become the next abbot? I have no idea.

And there's no real (read: plot-related) reason for Kai Sen to be the abbot's heir in the first place. Okay, yes, it plays a teeny-tiny role in the climax, but the same result could've been achieved through other, more logical means.

It's just so confusing and unnecessary and illogical and aaaaugh.

Finally, a minor complaint about the synopsis. I can't help but wonder if the person who wrote it even bothered to read the book, because (1) Serpentine is not a "sweeping fantasy," (2) it does not offer "[a] lush portrayal of life in the ancient Kingdom of Xia," and (3) the synopsis doesn't even reference the major exciting conflict of the story (which, as I mentioned earlier, involves demon problems).

I don't mind its failure to reference the demon problems so much, but my reading experience did suffer from my belief that Serpentine was going to be a "sweeping fantasy" providing a "lush portrayal of life" in this kingdom. Those phrases had me expecting a much richer display of worldbuilding than actually awaited me. Serpentine focuses very tightly on Skybright and her relationships with Zhen Ni and Kai Sen, and we don't see much of the kingdom/society outside of Zhen Ni's quiet manor and the forest around Kai Sen's monastery.

I frown on synopses that get my hopes up for something the book doesn't provide, and this synopsis earns a full-on glower.

Something else that should've gone into the Reasons For My Affection section is the tone of the book's ending. It's not a cliffhanger, but neither is it a happily-ever-after. Skybright's left with a clear goal (and a strong motivation to pursue that goal) for the sequel, and we're left with the feeling that her story's just begun.

And yes, I will snatch up book two the moment it's released. I need more of what Serpentine offered, asap.